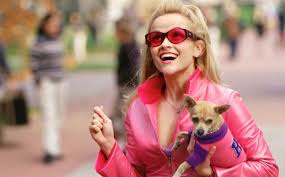 What I Learned From Watching Legally Blonde

By: Tsegereda Tefarie ​
Legally Blonde was one of the first movies I watched as a young girl. As shallow as it sounds, this film really had an impact on me: it made me want to college. In the film, Elle attends  Harvard University Law School, which interested me because you don’t get to see this a lot on the big screen.

Here we meet Elle Woods, our fabulous heroine of the story. Elle is a fashion merchandising student who attends CULA. She’s heavily involved on her campus as she was the president of her sorority.  She is everything that most college students want to be,  like being an active member of her community, getting a 4.0 GPA and a boyfriend who she thinks will eventually propose to her.

Even though people think she is dim-witted and shallow, she actually is quite the opposite of that she cares deeply for her friends that she made in law school and at CULA. When she goes on a date with her boyfriend, Warner Huntington, she expects  him to propose to her but instead, he breaks up with her at dinner because he didn’t see a future with her because he has a vision of a serious career path as a senator and couldn’t do that while dating someone he perceived as not serious enough for him.

After hearing this, Elle becomes furious and plans on showing him he’s wrong about her . She gets accepted into Harvard Law and becomes extremely knowledgeable. She shows that she doesn’t need her boyfriend anymore and that she’s smart enough to get into Law School just like he said she wasn’t . At first, it took her a while to gain the acceptance of her peers, but after showing how smart she was while still being herself, she eventually got the respect of everybody.

Elle ends up getting big internships and working on a case where she uses her skills of deduction and knowledge of perms to figure out who killed the victim.  Elle wins the case and Warner, her ex-boyfriend, tries to win her back but is unsuccessful in his efforts.  Elle ends up graduating from Harvard Law School and giving the graduation speech as the class valedictorian.

What I think all women should take away from this film is that you shouldn’t change yourself to make any many man want you; you should always chase your dreams and not someone that doesn’t want you. Also, if you work hard, your dreams can become a reality. Elle dreamed of becoming a lawyer and when she began to dedicate herself to it, she graduated at the top of her class at Harvard Law School. Another takeaway from this movie that is  profound is the reminder that you should never change yourself for someone, you should always be your true and authentic self regardless of whether or not  people like it. The more time you put into making yourself a better person, the more successful and better off you will be versus when you chase people that don’t care about you.

View all posts by yesshecancampaign